Disclosure: This article contains affiliate links to support our site. We may earn commisions from any product(s) you buy via links on this page at no extra cost to you. Commissions do not influence our editorial content.

Quick Digest: Pros, Cons and Verdict
Here's What We Think
The Omega VRT400 is a significant upgrade from previous models, including a heavy duty mesh filter and a spout cap. We say when you're ready to get serious about juicing, make sure this is in your top 3.
Pros
Significant upgrade features from previous models
Heavy Duty filter screen
Make nut milks and baby food as well as juices
Small footprint requiring little space on your counter
Self-cleaning system that really works
15-year warranty
Cons
Small but necessary learning curve to get the best from it
Slow compared to centrifugal juicers
Soft fruits and vegetables produce a purée
4.3
We Like It!
Interested In This Product?
Learn More at Amazon

What Is the Omega VRT400 Heavy Duty Dual-Stage Juicer?

The Omega VRT400HD Juicer is another rock-solid juicer from Omega.

They were actually the first company to design upright style single auger juicers and have produced many models designed to fit every need.

This is a vertical slow masticating juicer that turns at the slow speed of 80 RPM. Its efficient juice extraction yields high-quality juice that can last up to 72 hours.

It has upgraded parts from previous models and includes a heavy-duty filter which is 8 times harder than before, a spout lid as well as a pulp mesh lid to act as yet another stage to give you pulp-free juice.

There’s a lot to say about this juicer so read on and get all the juicy details.

The VRT400HD comes in a compact vertical design and a small footprint. It clocks in at:

The juicer’s design is a step up from the VRT350 and VRT380 models. The immediate improvement you’ll notice is the juice spout has a cap attachment stopping the juice from coming out.

Is that just a gimmick? Actually, no.

This cap has two uses:

1. We often notice, especially when juicing vegetables, the juice doesn’t mix well and needs a good stir before drinking. If you keep the cap closed, the juice builds up in the juicing bowl and the wiping blades mix the juice. There’s an indicator on the bowl so you know what the maximum limit of build-up is before you have to open the spout and your freshly mixed juice pours into your juice collector. Here’s a close-up picture of the juicing bowl containing nut milk and the closed cap:

2. When you have finished juicing you close the cap and pour in a cup of clean water, again being careful not to exceed the limit of too much liquid. You then let it run for about a minute or two then open the cap and let the ‘dirty’ water flush out. This process does an amazing job with the mesh filter so when you do dismantle it for cleaning, your job is a lot easier.

The other significant difference is the juicing strainer has been upgraded from previous models and is described as ‘heavy duty’, hence the HD in the model name.

This upgrade means that the plastic is 8 times stronger and tougher compared to previous models. FYI: I am referring to the dark smokey-colored strainer. You do get another yellow strainer included and this is for soft produce so doesn’t need to be HD.

How Long Is the Warranty?

The Omega VRT400HD provides a very high-quality juice. In the box, you get two filter screens as I mentioned above and it’s important to use them correctly.

The yellow colored filter has larger holes and you should use this with soft produce such as grapes, tomatoes, etc.

The dark smokey colored screen has much smaller and finer holes and should be used for hard produce as well as leafy greens and wheatgrass.

Some users have reported this juicer makes mush rather than juice or jams and gets stuck often. As with any vertical juicer, it’s really very important you get smart on how to use it. For example:

Here’s a great video illustrating what I’ve mentioned with a different juicer. I really recommend you follow these steps with any juicer, not just the Omega VRT400HD:

If you follow the above advice about preparing your produce properly you‘ll be using this machine for years (don’t forget the 15-year warranty).

Is It Easy to Use?

Vertical juicers are not all identical but I’d say they’re reasonably similar and easy to use and the Omega VRT400HD is no different.

When you lower the juicing bowl (containing the auger, mesh, etc.) onto the main housing unit containing the motor, there’s no need to twist to lock like on previous models, it just locks immediately providing it’s lined up correctly. It won’t sit flush if it isn’t, so you can’t go wrong.

Other than this, the Omega VRT400HD is extremely easy to use and will last you a long time.

Is It Easy to Clean?

I totally recommend running water through the system as I described above before dismantling the juicer for cleaning.

The same goes for pre-cutting your produce.

Doing those two things ensures you’ll have little cleaning to do when you dismantle the juicer.

Always use the supplied brush to scrub both sides of the mesh and you can’t go wrong.

Everything is dishwasher safe so take advantage of that too although never skip manually cleaning the mesh. You’ll want to keep this in great condition always.

The entire clean-up should take no longer than 5 minutes if you do it all by hand.

Should I Buy the Omega VRT400 Heavy Duty Dual-Stage Juicer?

If you want to get serious about juicing by either buying one of the best juicers or you simply want to upgrade, then the Omega VRT400HD should be on your list of top 3.

The improvements made over previous models are significant and I especially like the self-cleaning mode and the spout lid which is responsible for both.

Even without this, closing the cap when you take the juice away ensures you don’t get that annoying drip on your countertop.

I love this juicer and its fans don’t just say it’s good, they love it! 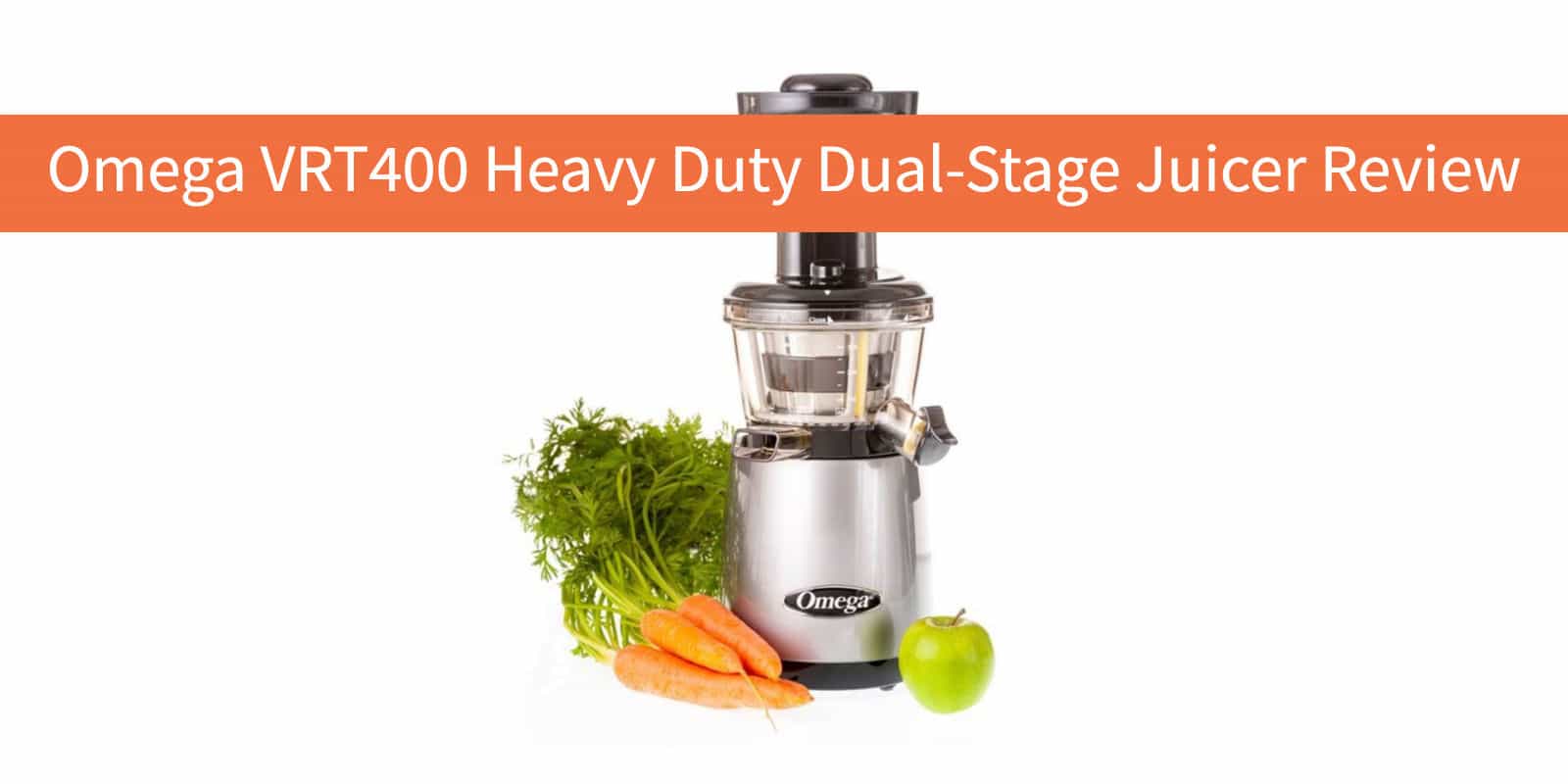