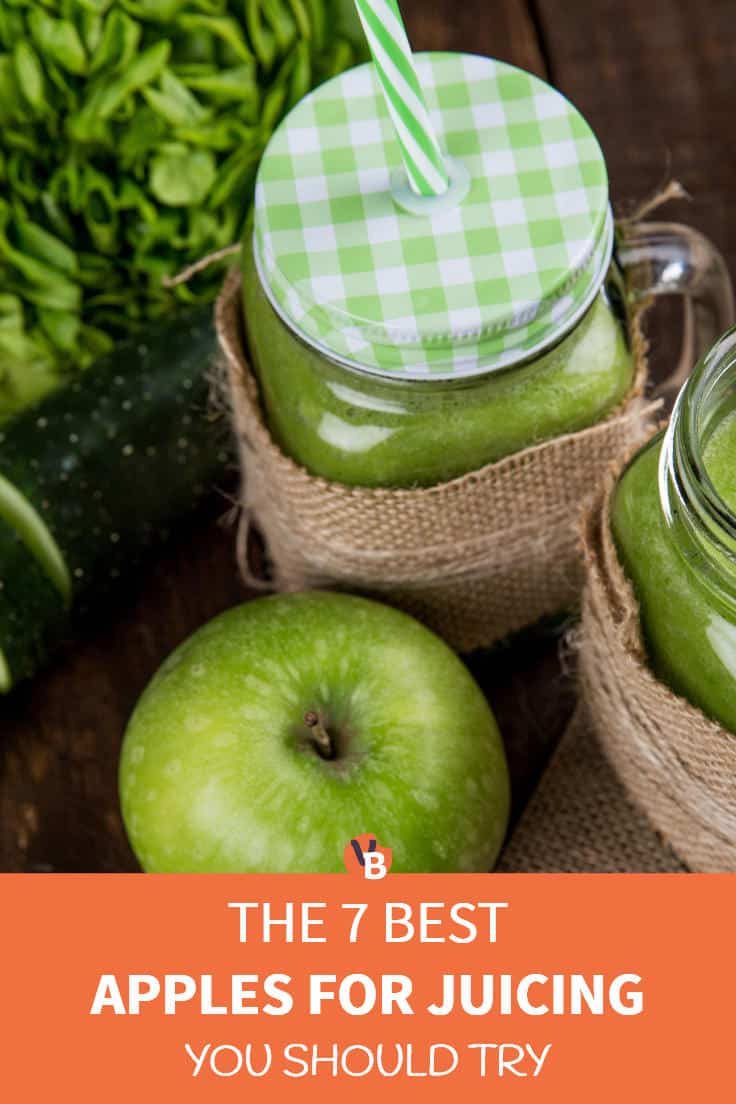 There’s nothing like biting into a crisp, sweet apple but you may also want to make a refreshing glass of juice. Picking the right variety makes all the difference!

As more of us wise up to the importance of including enough fresh fruits and veggies in our diets, juicing turns out to be a very easy and quick way to get these nutritional goodies into our diets.

By extracting and separating the juice from the insoluble fiber, you’re able to consume a large concentration of nutrients in a relatively short time.

These days, apples happen to be a common and affordable staple in many juice recipes and produce a delicious tasting juice on their own.

But with so many varieties to choose from, I was asking myself, which apples should I be juicing?

I’ve since found the following 7 to be among the best apples for juicing:

Let’s learn some more about these apples and about juicing apples in general.

What Are Some of the Benefits of Juicing Apples?

Let’s start by highlighting some of the reasons you should think about juicing apples.

Apples have a varied nutritional profile, but they’re considered to have a high content of vitamin C, fiber, antioxidants and potassium. Of course, if you’re juicing them, you should scratch insoluble fiber from the list.

They can also help potentially improve depression (due to quercetin content) among other great benefits.

Outside of nutrition, apples are usually very easy to find for most people and they’re one of those ingredients you’ll rarely worry about running out of.

Sometimes juicing can be pricey depending on the ingredients you use. But most apples are generally quite affordable, especially if you can get a discount on buying them in bulk.

Are All Apples Great for Juicing?

Like me, you’re probably used to buying those few different types of apples you can get at a typical grocery store chain. You know… The ones that have been selected for best appearance, flavor, and convenience in cultivation.

That’s why many are surprised to learn you can actually find over 7000 more varieties of apples around the world.

Of all the different varieties of apples, some are a much better fit for juicing.

Some people even suggest you should juice certain apples depending on what you’re trying to achieve.

I suggest you choose a few from our list below and use them as your “tasty staples,” then you can try experimenting with other varieties for a mix of flavors. The best apple juice is said to come from using a mix of sweeter apples with sharply-flavored varieties.

Here’s Fine Choice Foods’ chart comparing some common apples to each other:

Is It Safe to Juice Apple Seeds?

Some people have concerns about potential cyanide poisoning from consuming apple seeds or juicing apples whole without removing the seeds.

It turns out there’s very little to worry about. To reach a level of poisoning, would require you to ingest from 150 to thousands of thoroughly crushed apple seeds before it has any serious impact on your well-being.

So whether or not you want to remove the seeds before juicing, is entirely up to you.

How Many Apples Do I Need for One Cup of Juice?

The answer to this will always vary because it depends on the type and size of apple you’re juicing.

Two apples of the same size can also have different amounts of juice in their flesh, as one can be drier than the other.

But on average it takes between 3 and 6 apples depending on size to make 8 fl. oz. of juice or about 3 medium-sized apples.

The Top 7 Best Apples for Juicing

Now that you know some of the benefits and reasons why you should be juicing apples in the first place, let’s narrow down the best apples for juicing so you can go ahead and get started! 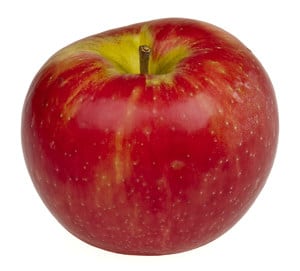 Honeycrisps are a hybrid apple created in Minnesota in the early 1960s but didn’t reach commercial popularity before the 1990s.

And, hey, did you know the University of Minnesota (UM) used to have a patent on these apples?

Yup, which meant every time someone bought a yielding Honeycrisp tree, they had to pay up to $1.30 to the UM. How’s that for a fun fact?

Today, because Honeycrisp trees are high maintenance and take time to produce enough fruit, supply has a challenging time keeping up with consumer demand.

For us, this unfortunately also means delicious Honeycrisps are up to 4 times more expensive than other popular apples.

Either way, if you don’t already love them, you will after you’ve tried a nicely ripened one. They’re popular for both flavor and texture, possessing a nice balance between sweet and tart with a slightly ‘coarse texture’ quality.

You can eat them as they are, use them for baking, or for our intentions and purposes, make delicious, fresh-pressed juice which is naturally sweet and won’t need anything added for sweetness.

Just be aware that Honeycrisps should be considered a luxury juice ingredient because you’ll be paying a premium for them. 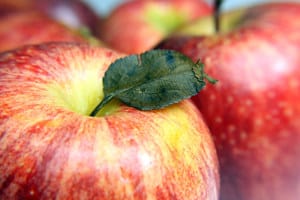 A cross between Golden Delicious and Kidd’s Orange Red apples, the Gala apple is among the most popular variety of apples in the world and ranks 2nd behind the Red Delicious variety in the United States.

Gala apples originally came from New Zealand and were discovered in the 1930s before being sold mainstream in the mid-1960s and eventually becoming a big hit on the U.S. market. They’ve even received royal embracing from Queen Elizabeth II.

They’re beautifully colored with red-blush to pink-orange stripes on a pale-yellow background.

They’re readily available at grocery stores year-round, but many homeowners also like growing their own Gala apple trees at home.

And you can’t blame them. The flavor of a Gala apple just picked is absolutely unmatched to one that’s been sitting for days at the store.

They offer a nicely balanced flavor of sweet and tart with a hint of vanilla.

For juicing, Gala apples are a very cost-effective ingredient so you’ll have an easier time affording it.

These apples will give you a naturally sweet-tasting juice so you won’t have to worry at all about adding something else for sweetness.

Because Gala apples are harvested early in the season, they tend to be a smaller size compared to other popular apples on our list.

Expect to use 3-4 apples per cup of juice. 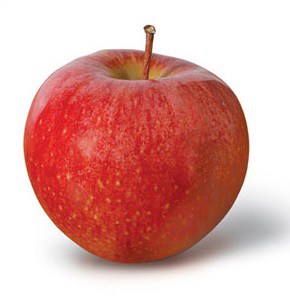 Cameo apples are a bright and red-striped apple with a crunchy and sweet taste.

They were discovered on a Washington state property in the early 1980s and are believed to be a relative of the Red and Golden Delicious variety.

They’re among the top 10 apples produced in Washington State.

You’ll have the best chance of getting your hands on these delicious apples between October and April.

Cameo apples are another affordable variety you can use for making fresh apple juice. The juice will be enough with no need for additional sweetening.

They’re generally about medium size, so expect to use 3-4 of them per cup of juice. 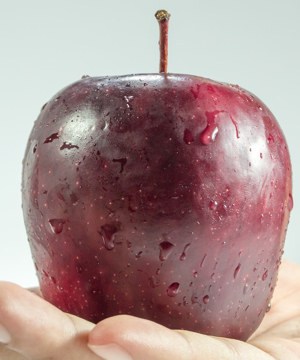 Red Delicious apples account for nearly 50% of Washington state’s export to other countries around the world and are the number one most common apple variety in the United States.

The Red Delicious apple was discovered in the mid-1870s on a farm in Peru, Iowa.

It’s a medium to large-sized apple with a deep, burgundy color, mild to pronounced sweetness, and boasts an interesting nutritional profile.

Although they’re widespread, their popularity has been diminishing since the 1980s. Consumers are starting to shy away from them because they’re being cultivated for appearance over flavor.

Price-wise, Red Delicious apples are among the cheapest of the popular varieties, so you’ll be able to make quite a bit of juice for your money.

Depending on their size, you might be able to get away with 3 apples per cup of juice. 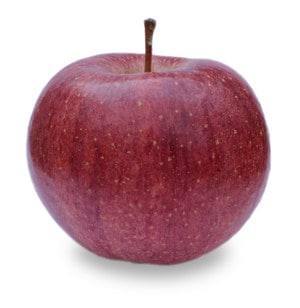 Named after a town in Ohio, Rome apples are a bright- to deep-red and crunchy variety from the early 1800s with a mildly sweet flavor.

As a juice, it has a nicely sweet-tasting and tangy flavor.

If you cut one open and you happen to see pink or slightly reddish color inside, don’t panic!

The red pigmentation from beneath the Rome apple’s skin can “seep” into and permeate the flesh causing its color to change. It’s a natural occurrence and entirely harmless.

These are also cheap apples by the pound, so you’ll have little to worry about there.

Rome apples are generally big apples and will yield a good amount of juice. You’ll need 3-4 apples for a cup of juice.

The Granny Smith green apple, named after Maria Ann Smith, a British-Australian orchardist, has become one of the most popular apples because of its low-sugar content as it is often used in juicing recipes by health enthusiasts.

They originated in Australia in the mid-1800s and eventually gained popularity throughout the 1900s, starting with Great Britain in 1935, achieving worldwide acclaim through the 60s, and eventually reaching the U.S. market in the early 1970s.

The fruit is bright green in color and has an acidic and very tart taste that mellows out as the apple ripens.

If you’re looking for pronounced sweetness in your juice, Granny Smith apples won’t be your best choice as they lean more on the tart and acidic side.

These apples are better suited for mixing with other produce for a variety of flavors and are popularly used in green juices where they:

If these are the kind of properties you’re looking for, but you can’t find Granny Smith apples, you can substitute with other tart apples.

Granny Smith apples are usually quite affordable, so you should have no issues buying a lasting supply.

Expect to juice 3 medium-sized apples for 8 fl. oz. of juice. 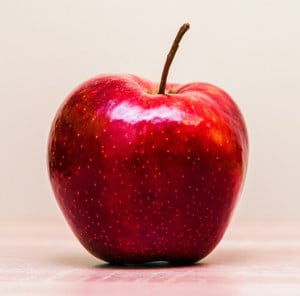 Fuji apples are another apple variety to sit on the top 10 list of most popular apples in the U.S.

They originated in Japan around the 1960s and were created by crossing the Red Delicious and Ralls Janet apple variety.

Fuji apples are known for having a relatively longer shelf-life than most other apples which makes them a very suitable choice for buying and storing in bulk.

They’re generally large apples and quite juicy, too.

If you’re looking for sweetness, Fuji apples share a similar sweetness level to the Honeycrisps, placing it among the sweetest apples you can find.

This variety will definitely give you a great-tasting and very sweet juice.

And there you go! You’ve now got 7 great options to choose from for your next apple juicing experience!

Don’t be afraid to try some different combinations and feel free to experiment with apples not included in our list. But these 7 Best Apples will definitely give you a good place to start.